Playful Way to Teach Grid Reading or You Sunk My Battleship

So Mudge pulled out my travel Battleship to play this afternoon.  And he tried to explain to me that he "knows how to play it."  But in actuality, this nearly 6 y.o. did not.

Battleship is a classic game.  It started out as a pen and paper a long, long time ago. Then Milton Bradley created the one we know and love today that requires fine motor coordination, letter and number recognition, spatial awareness, and grid reading skills.  Grid reading can be broken down further into following a vertical and horizontal line to the place at which they intersect.  This is not necessarily easy to get.  This is a precursor skill to being able to manage charts and graphs, maps, multiplication tables, or super geeky: plotting points on a Cartesian plane. 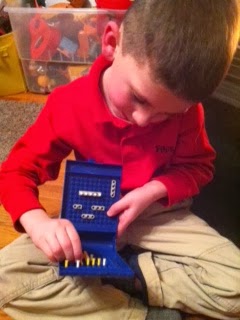 Of course, we played. And, of course, he thought it was great to sink my battleship.  But it took time to get there. He needed the demonstration of how to read a grid.  Now that I think of it, Battleship appears to teach plotting a little backwards because you state A,1 for example which is actually the Y axis first. True plotting is x axis first.  If the first number in the ordered pair is positive, move to the right. If it's negative, move to the left. Hmmmmmm. Anyway... 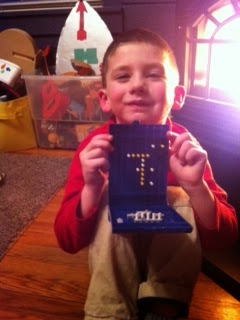 I found a website called FunBrain.com which has little educational games from grade K through 8th, that has some plotting activities.  You can also sign up for Khan Academy.  If you haven't already, Khan Academy is a free website that parents, teachers and students, or anyone for that matter, can test their math IQ then challenge themselves by learning new concepts, or get support in something they are struggling.   This is a PHENOMENAL resource.  The founder of Khan Academy originally just made YouTube videos to help his struggling niece; now it is a educational platform supporting millions of users at home and at school.

So math can FUNdamental, not just mental.  Sometimes you have to look at things outside the quadrilateral parallelogram in order to find the joy….

Oh, and just for a modification, the plastic travel version that I have had no contrast between the raised letters and numbers and the background which made it difficult to read. So I just use a black  permanent marker to highlight the raised alphanumerics.  Result- higher contrast, happier eyes.