So Boog received the Smithsonian Gummy Bug Lab for his birthday.  We were excited to use it.  He loves science and bugs, so it was right up his alley.  Plus, you are actually supposed to eat the results. 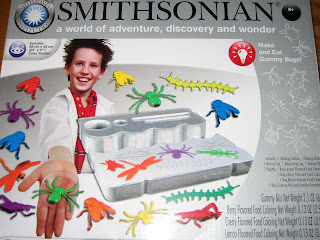 The package came with three flavorings: lemon, berry, and cherry.
Gelatin base
Various "tools" like a pipette, measuring cup, mixing cup, and the bug mold.

So Boog and I collected our items, read the directions, and carefully executed each task with the precision of a CSI lab technician.  Except when the results were "ready" after the allotted 15 minutes (with an extra 15 for good measure since the initial 15 minutes did not produce a moldable bug), the product was less than appealing.  Or edible for that matter.

First, the texture was... ummm, how shall I describe it.... like the insides of a disposable diaper that had accidentally gone through the wash.  It was grainy, gelatiny, and unnatural. 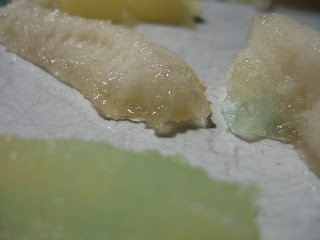 The color was as vivid as a sepia photo.  Nowhere near the intensity that it demonstrates on the box cover.  And does it look at all like the fabricated results as shown on the box? 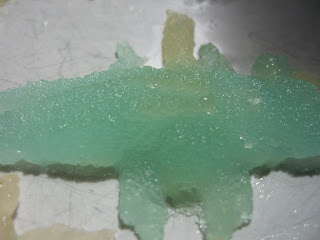 The taste.  Let's just say it tasted like an Aspartame cocktail, though it does not indicate there is any in the mixes provided.

Only a few times have I really disliked a toy.  This is one of those occasions, unfortunately.  I would highly NOT recommend this item unless you want to make someone disappointed.  And unless your child looks like the miniature version of Dr. Who on the package cover, I don't think it he'll appreciate outcome.

Luckily, we had fun in the process.  And I try to use my mantra: Its the process, not the product.  But still..... At least there is one upside: I now have a mold for making Jell-O Jigglers.
Posted by OT Mommy at 5:54 PM