Think Fun!? Absolutely with Cartoon It!

I was granted the opportunity to give my humble opinion on another Think Fun Jr. game: Cartoon It!  When it arrived in the mail it was like Hannumas (or Chrismakkah, the combo holiday in our home).  I opened it up and asked the boys if they wanted to play.  Like they would ever say no to a game night....

I read the instructions, nice and easy.  Memorize It.  Draw It.  Score It.  Rinse and Repeat. 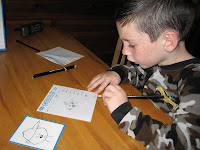 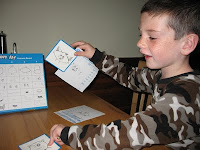 Though at first Boog was a little intimidated and discouraged, thinking he couldn't draw the items, he quickly learned that with the visual cue of the Feature Board, he could do it.  He was so proud of himself.  And so was I.  I was also amazed at first how poor my visual memory was, but soon I redeemed myself and rightfully recalled and illustrated all six features.  Surprisingly enough, even Mudge, at 3 1/2, eagerly participated.  However, his artistic renditions of the characters looked more like amoeba. 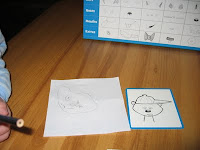 I think we did at least four sessions of Cartoon It! that night.  And it was fun.  So much so, I had to bring it to work and share it with my students and colleagues.  This is why:


Of course, during the therapeutic play session, you get language development:


Then I thought of variations and modifications to the game so that it could be tailored to some of the special needs population with which I work.
I love, love, love this game.  And in the brief time I have had it, I have managed to hook a few kids and adults onto it as well.  Give it a try, it is well worth the investment for home and school.  You can find it for less than $20 on Think Fun's Site, Amazon, Barnes and Noble, Sears and others.
Cartoon It! is recommended for ages 6 and up.
Posted by OT Mommy at 7:54 PM