Awesome things to do in Maine (A sampling of our favorites – by no means a comprehensive list!) Guest Blogger: The Brombergs

Hi, OT Mommy Fans! We are the Brombergs – Sam, Casey, 3 year old Harry, 9 month old Cecilia, and Freddie, the Brazilian Basset Hound.  (Seriously, the dog is from Brazil.  We have papers for him Portuguese.)  Sam and Becca are cousins, and we call Becca’s Mudget, “Little Sam.”  He and Harry are just about a month apart.  We live in Oakland, Maine, which is near Waterville, in the Belgrade Lakes Region.  Casey is writing these posts, with Sam looking over her shoulder making “suggestions.”

Bounce House Bargain in Bangor
In June, the Maine Jump opened in Bangor, which is a little over an hour from where we live, but conveniently located near a set of grandparents. Unlike more populated states, there really are not a lot of bounce house places here.  The Maine Jump only has four stations so far, but one of them is large, like a mini obstacle course.  $5 buys your child (ages 3 and up) two hours of bouncing and sliding fun.  There is no charge for parents, but parents have to accompany the child at each station.  There are concessions on-site, and the food is all allergy-free.  No gluten, no peanut butter, no poor kid with food allergies feeling like a leper.  The Maine Jump is a good value, especially considering the quality nap your child will take afterwards.
Maine Discovery Museum
Another fun Bangor spot is Downtown’s Maine Discovery Museum.  Interactive is the name of the game here.  Every exhibit is a sensory or tactile experience, with each designed to educate about Maine or inspire the imagination.  There’s a working replica of the Tidely Idely (for Burt Dow, Deep-Water Man fans) and a giant, climbable tree house, among other attractions.  For quiet spaces, there’s also an exact set up of the room from Good Night Moon, with copies of the book so that you can read it with your child. 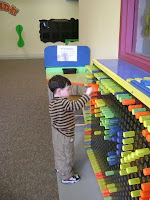 Coastal Maine Botanical Gardens
Last summer, the CMBG opened a beautiful children’s garden.  I’ve heard some visitors describe it as “Disney-esque” in quality.  There are scheduled story hours and kitchen garden events, but the real highlight is the beginning of August’s Maine Fairy House Festival.  If you have a little girl who’s all about princesses, this will be right up her alley.  But tourism planners in Boothbay Harbor are no fools – the Maine Fairy House Festival also coincides with a Thomas the Train tour on a local historic railway.  There’s also an oceanarium nearby with an awesome touch tank, making Boothbay and CMBG a nice visit.
Hiking
If you really want to explore Maine, there’s a new Web site that can help you find hiking trails for any ability.  Mainetrailfinder.com has mapped and rated trails all over the state.  In Western Maine, where Sam grew up, there’s even a group of people called the “Peak a Week” club, who hike progressively more difficult trails each week through the course of the summer.  In our area, we stick to some of the easier trails, which seem to surround so many of the lakes.  This helps both Harry and I – I’m not the most outdoorsy person in the world, and with a baby in a Baby Bjorn, I need something easy.  Our favorite is a 15 minute ascent called French’s Mountain.  At the top, you have 180 degree views of the Belgrade Lakes.  It’s easy enough that Harry was walking up it without a problem at age 2. 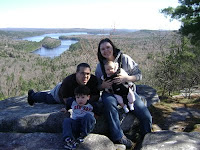 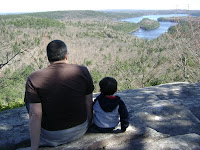 Worthwhile Tourist Trap – Old Orchard Beach
Pier fries, snow cones, sand castles and the largest carnival/amusement park in Northern New England.  What’s not to love?  Don’t get me wrong, OOB is crowded and some of the tourists that come could learn some better manners, but all in all, it makes for a good day trip.  We conquered Harry’s fear of carousels this weekend, which was totally worth it.  We also discovered a great parking area (Jimmy’s) that had beach access AND included private restrooms in the price of parking. 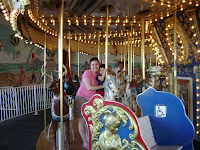 Another great Tourist Trap – L.L. Bean in Freeport
You can’t drive through Southern Maine without stopping at L.L. Bean, especially if you’ve never been before.  There’s a giant Bean boot that makes a great photo op, plus a play area in the kids’ section with lots of interactive and learning spaces.  Our favorite part is the big aquarium, rainbow trout and other native fish species.  But the really cool part of the aquarium is its “bubble,” letting a little person feel like he or she is in the tank with the fish.  L.L. Bean has lots of free concerts and child-friendly activities, since Freeport is its flagship store.  Just remember, though, if you go for a big event, you’ll have to wait in line for a chance at the bubble!
Open Lighthouse Day
If you love Pete’s Dragon, you can have the opportunity to visit a real Maine lighthouse on September 17.  Lighthouses all over Maine are open to the public that day as part of an awareness program by the U.S. Coast Guard.  Depending on the lighthouse you visit, you can go pretty high up in the tower.  It’s really cool.
Maine Wildlife Park
Less costly than York’s Wild Kingdom (which is also an amusement park), the MWP showcases rehabilitation and conservation efforts of native species.  Bottom line – if you want to see a moose and a black bear, you can see one here.
Acadia National Park
Bar Harbor and Acadia could totally be their own entire post.  There is a lot to do here and there are some neat historical features to the area that make it a can’t miss place to visit.  Park yourself at Rosalie’s Pizza when you’re tired after a long day – some of the best pizza in Northern New England.
So, come and see us!  We’re worth the trip!
Posted by OT Mommy at 9:08 PM